The popularity of adult toys has increased over the past decade. Research suggests that the taboos surrounding vibrators and other devices intended to increase individual or mutual pleasure are dissolving as more individuals (and couples) reach for a far more intimate type of technology.

Enhancing physical pleasure undoubtedly enhances sexual enjoyment. But how does using sex toys impact the satisfaction that both partners derive from their overall relationship? Some novel research into the prevalence and demographics of sex toy use sheds light on this question — and the results indicate that pleasure in bed and pleasure in a relationship may differ slightly for partners depending on their gender. 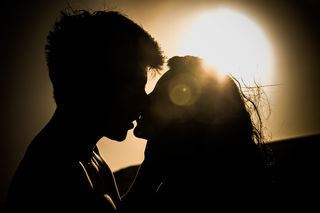 The belief that “using a sex toy means your partner isn’t a good enough lover is one of the most common misconceptions people have about sex toys,” says licensed marriage and family therapist, and resident relationship and sex expert at AdamandEve.com, Dr. Kat Van Kirk, Ph.D. “One partner may also fear that another partner’s use of a sex toy will replace them or that they’ll become overly reliant on them for arousal and/or orgasm.”

More frequent use of sex toys among individuals who do not identify as strictly straight has also been found among women, according to a 2011 study led by researcher Vanessa Shick, Ph.D. While 53 percent of heterosexual women report having ever used a sex toy, 86 percent of women who have sex with women say they’ve used a sex toy — and experienced a noticeable uptick in sexual satisfaction because of it. (It should also be noted that as Shick, et al., write in their study, “Vibrator-using lesbian and queer-identified women reported significantly less difficulty with pain than lesbian and queer-identified women without a history of vibrator use.”)

Generally speaking, couples who can explore novel ways of being intimate — including trying out one or more sex toys — tend to fare better in terms of maintaining passion and desire (in addition to relationship satisfaction) over the long haul. A 2016 study conducted by Chapman University’s David Frederick, Ph.D., found that women and men who reported feeling satisfied by their relationship and the sex that they had with their partners were more likely to report having used sex toys together — in addition to other activities, such as taking a shower together, trying new positions in bed, and scheduling a date night to have sex.

Whether sex toys end up enhancing a relationship or leading to conflict likely depends on the nature of openness and communication between partners. As a 2013 report by the Guttmacher Institute demonstrates, the more positively individuals in relationships rate their interactions with their partners, the higher they tend to rate their desire for one another as well as the satisfaction they derive from their relationship — inside and outside of the bedroom.

In the context of sex toys, positive communication means (ideally) that partners who feel threatened can open up about their concerns, feel heard and validated, and receive reassurance from their partners that a desire to use a sex toy is in no way a comment on their virility, desirability, or sexual ability. (Likewise, the partner who desires to use a sex toy should — again, ideally — be able to communicate that desire without being judged, shamed, or otherwise pulled away from. Not surprisingly, Reece and his colleague Debra Herbenick, Ph.D., surmise in a 2010 paper on the use of vibrators within relationships, “it may be that being able to communicate openly and feel that one’s sexual interests and pleasures are accepted by one’s partner enhances satisfaction.”)

Van Kirk believes that incorporating toys can boost the relationship and sexual satisfaction of anyone open to and respectful of their own and their partners’ inclinations and boundaries. “If there is a sense of openness and non-judgment that can be cultivated most people can learn to incorporate new aspects into their repertoire versus being resistant. Talking about the resistance can be helpful in dispelling myths your partner has had about sex toy use. And some education always helps. For instance, the fact that most women do not orgasm through penile/vaginal alone should be enough to invest in a sex toy.”

There are no users currently online